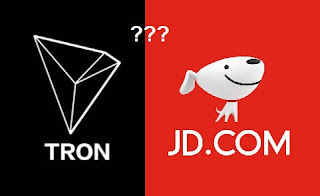 about the upcoming partnership that he mentioned a few days back on Twitter. Although he didn't name any names, saying the companies themselves want to do the unveiling, he did drop some further clues.

First, going into the call some people thought that an Alibaba partnership was in the works given Justin Sun's mentor is Jack Ma. However he put cold water on that possibility by saying it was a Fortune 500 and NASDAQ companies. Baba trades on the NYSE. The crypto and fear of some fake FUD caused some panic before rebounding.

Now thinking forward and taking some educated guesses, is it possible one of the companies is instead JD.com? JD.com is on the NASDAQ and is also in the Global Fortune 500. It would be huge, almost as big as Baba as JD is the Amazon of China, not Baba.

Coincidentally JD.com also just happens to have had one of their engineers hired away to TRON. What better way to build a bridge between the companies than to have someone that knows both sides. Lastly, Tron has been big in Crypto Doggies and JD.com's mascot is a dog and this is the year of the dog. The Chinese are very big in "Good Luck". So their first announcement, which will be lucky will be with JD.com!!!

Regardless of what companies they partner with and how substantial those partnerships are, I take confidence in knowing that Jack Ma is no fool. I don't know of any other crypto company that has a CEO whose mentor is of the caliber of Warren Buffett, Bill Gates, Jeff Bezos, or Mark Zuckerberg.

This is all just an educated speculation and I have positioned myself to take advantage of this opportunity by buying some TRX with ETH and LTH from my GDAX account. For those that unfamiliar with buying ALTs like TRX here is simple tutorial about how to do that: How to buy Alt Coins From GDAX / Coinbase.

If have any guesses as to which Fortune 500 companies TRON is partnering with then leave them below. Lastly if you don't have a Ledger Secure Wallet I encourage you to read about it.