Bitcoin New Year Resolutions: Crypto Traders Vow to Stop Trading Bitcoin - Instead Will Shower, Put on Pants, and Go Outside. 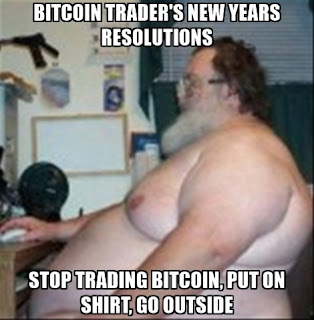 New Year Resolutions are upon us and if you are trading in the volatile world of crypto currency it may give you pause. Taking a logical, pragmatic approach, is it possible that this New Year many crypto traders will vow to stop trading as a resolution?

I think it is plausible. I also think that the extreme volatility and price action may also have those traders throwing in their resolutions early, while others will slowly fail over the first week.

In addition, I think there will be pent up selling that will also occur because of tax planning. Those holding gains were hoping to hold until after the first so they could delay paying capital gains until 2019. The combination of both of these events will lead to what I believe is further downward pressure. This could possibly also snowball further as fear grows in others that this isn't "just another dip".  For those that invested at $19,000+ they might be done and never return resulting in even more downside risk.

These three factors have me extremely bearish near-term. For the record, I am currently not invested at all in Crypto (sold all on the December 19th), but if we get a big enough flush I may enter for a trade. This isn't going to the moon so it will just be to make a few dollars off someone else buying higher. There is nothing fundamental on the horizon that shifts my thoughts about crypto to make me a long-term bull.

This isn't a buy or sell recommendation for Bitcoin and/or Alt Coins. I do suggest whether you are investing Bitcoin or Alt Coins to read the following bible of investing: The Intelligent Investor. It was originally published in 1949 by Benjamin Graham and Warren Buffett call this book his textbook.

What are you predictions for New Year's price action of Bitcoin and other ALT coins. Leave your predictions below.